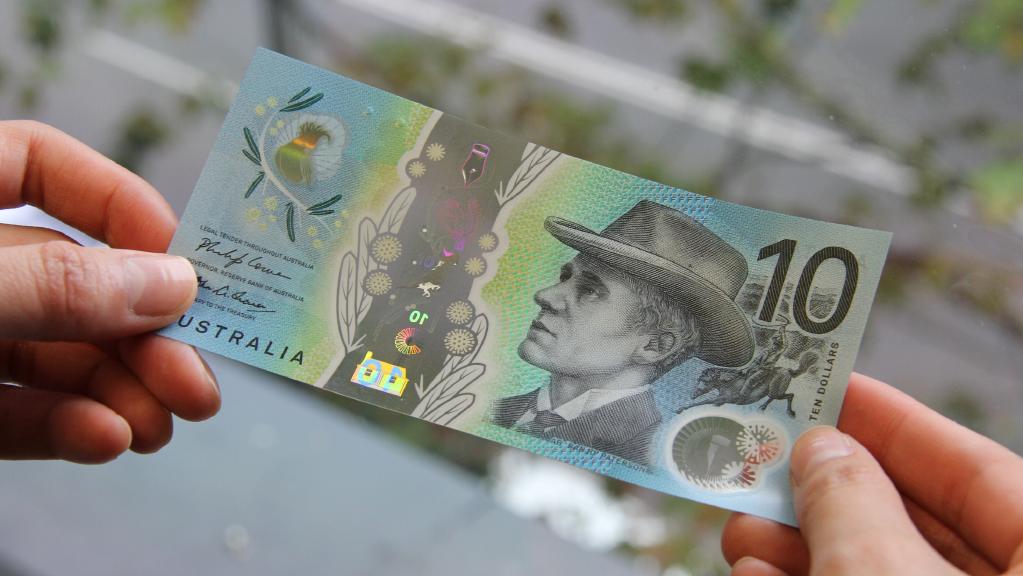 The Reserve Bank of Australia (RBA) has released images of the new design for Australia’s $10 note – the first redesign since 1993. It will be issued from September 2017, while the existing series of banknotes will remain legal tender.

Designed by emerystudios, the new banknote continues to celebrate the two famous Australian writers, Dame Mary Gilmore and Banjo Paterson. Their work is recognised in several design elements, including new renditions of a pen nib and excerpts of their poetry in microprint.

The banknote also has more anti-counterfeit security features, such as a distinctive top-to-bottom clear window, patches with a rolling colour effect, and a bird flapping its wings as the note is tilted. You can read all about the new design and security features on the RBA website.

Below are before (left) and after (right) images of the $10 note. Drag the sliders to compare them.

The new design is second in line in the progressive update of all five Australian banknotes. The Reserve Bank announced the new series in 2015, and promised a new tactile feature to help the visually impaired identify the different denominations, after a successful campaign led by 13-year-old blind boy Connor McLeod to introduce the feature.

Each banknote in the new series will also depict a different species of Australian wattle and a native bird. On the $10 note, these are the Bramble Wattle (Acacia victoriae) and the Sulphur-crested Cockatoo (Cacatua galerita).

The designs are the culmination of a process of extensive consultation with subject-matter experts and the cash-handling industry, as well as qualitative research involving focus groups. Key aspects of the existing designs – colour, size and people portrayed – are being retained for ease of recognition and to minimise the disruption to businesses.

Despite these best intentions, it was a rocky start when the new $5 note was released in 2016, as it revealed a major design flaw. The world-first clear strip which runs through the top and bottom of the note caused problems in automated note readers at self-service checkouts, vending machines and gaming machines around the country. Many readers identified the strip as the end of the note, and, unable to recognise it, rejected it.

On the design, I think the new banknote is marvellous. By keeping the same colour palette and faces, it feels familiar and should make for a smooth introduction to the public. I particularly admire the new rolling colour effect and the more refined portraits which stand out in grey against the colourful backdrop. The new theme of wattle and native bird species is also delightful and adds that extra bit of Straya which is never a bad thing.

On the technical aspects, we are spoiled both visually and tactually. Intaglio print, clear windows, fluorescent ink, reversing numbers, rolling colours, flying birds, microprint and optical variable devices?! The convergence of so many sophisticated features in a single product, while being functional and durable, is astonishing. Australia’s banknotes are truly a feat of printmaking, and it’s no wonder that we have the one of the safest and most secure currencies in the world.

Who said print is dead?