Sydney FC (or Sydney Football Club) is an Australian professional soccer club based in Sydney, New South Wales. It competes in the country’s premier competition, the A-League, under licence from Football Federation Australia. The club has won three A-League Championships (in 2006, 2010 and 2017) and two Premierships (2009–10 and 2016–17) and is the only A-League club to have won the OFC Champions League (in 2005). The club’s home ground is Allianz Stadium, a 45,500 seat multi-use venue in the suburb of Moore Park. As the only A-League team in the city for the first seven years of its existence, the club’s fans hail from all across the Sydney Metropolitan Area. (Wikipedia)

The club recently revealed a new logo, which was developed in consultation with a select group of fan members.

“This new crest represents a coming of age for our club. It is an evolution of the previous design with a number of respectful nods to the past,” says Chairman Scott Barlow. “It is a premium and authentic football crest that will stand the test of time and be a true reflection of our club and our identity. We are proud to represent one of the world’s truly iconic cities and we now have a crest that emphasises that. An iconic club for an iconic city.”

The logo reveals the sails from the Sydney Opera House as seen from the Sky Blues’ home ground of Allianz Stadium with the Commonwealth Star remaining a feature from the previous badge.

The majority of brand names we come across everyday don’t give clues as to the product or service they represent. Take Apple, Toyota or Kraft for example. The same usually goes for their logos, but through marketing efforts, we quickly learn what these companies actually deliver. When the brand name does mention the context or industry of the business, there’s even less of a reason to communicate it pictorially, and that’s what made the football icon in the old Sydney FC logo superfluous. It’s a football club – we get it. And it took up way too much real estate.

To me, the best logos for football clubs, nay any sporting club, are the ones which depict something utterly unique to the club’s homeland. It could be a local landmark, a native animal, an artefact or symbol of significance to the region’s history, or something even more obscure which only local fans could truly appreciate.

The old logo was yet another example of one that alluded to the shape of the Sydney Opera House to assert its Sydney-ness. In this instance, the logo defined the building’s sails with subtle gradients that added some depth to the piece. While it was certainly a more abstract representation of the landmark, it also bore resemblance to a jester’s hat. Below that and the ball was a Commonwealth Star – again, not a particularly “Sydney” icon, but rather a symbol of the Federation of Australia. The crest shape containing these elements had an interesting skew and was flanked by tapering orange strips – orange not being particularly meaningful to the harbourside city – both of which which imparted a sense of energy and movement. That light blue strip was unnecessary, though.

The club name in italics complemented the skew of the crest and was indeed the only thing “Sydney” about the logo. Remove the name and the logo could have belonged to any football club under the sun.

The new logo features a more traditional shield design, the hallmark of the football club logo. It’s nice in that it contains all the other elements inside a neat symmetrical shape, however I don’t think this particular shield shape – akin to a wine glass – is the most attractive of the options out there. It’s too tall for my liking, and leaves too much space around the Commonwealth Star (which I’m disappointed to see has survived the update).

We now see a more complete rendition of the Opera House, which is technically still missing some sails, but at least there’s no mistaking what it is now. The two white strokes below it are a bit odd, though; I’m not sure of the point of those. Above the House is the club name, the typography of which is more sensible, but features spikes which truly bother my eyes. It also appears that “SYDNEY” is slightly off-centre (to the left) so that the letter “N” lines up with the shadow which runs down the centre of the shield (a shadow which the logo could have done without).

In regards to colour, the logo disposes of orange in favour of a flatter, blue colour scheme. Given that the team is actually nicknamed the “Sky Blues”, derived from the colour of the players’ jerseys, it makes sense that the new logo incorporates said colour.

So how does the new logo look on the jersey? On the slider below, I’ve included a picture of the current jersey (left) and a mockup of what may become next season’s jersey, featuring not just the new club logo, but also the new club-specific A-League logo (which I wrote about previously). 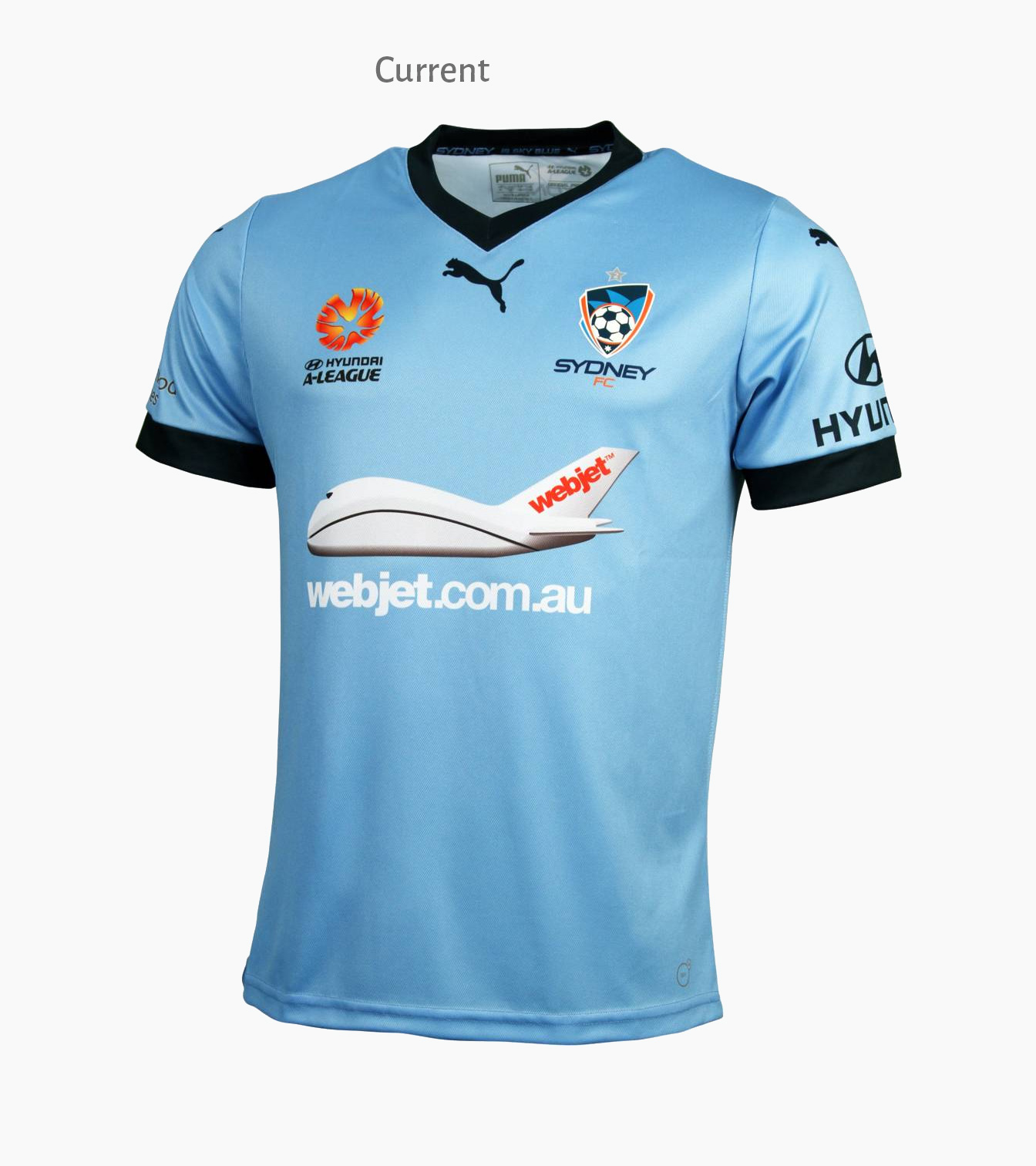 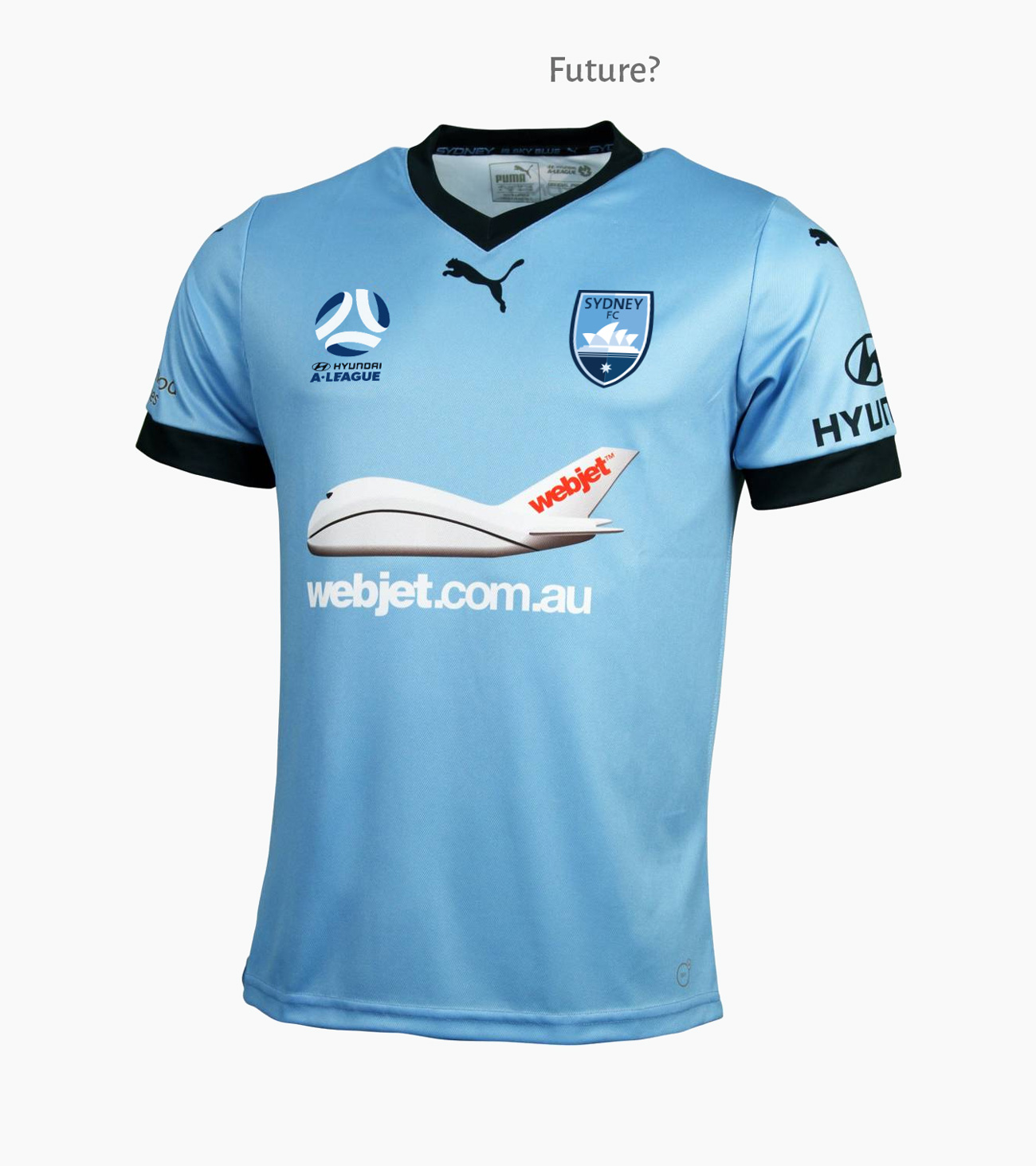 Man, the jersey looks a lot better without all that orange. The whole design is a lot more coherent and confident, and I can imagine the new, simpler logo producing well as a patch on other items of fan gear too.

Overall, this is an improvement on the previous logo, mainly because the old logo was looking dated and uninspired. That’s not to say the new logo wins any points for concept, but the aesthetic has changed for the better. I think the designers tried to inject a sense of heritage in the new logo by using a shield, and while it’s let down by some uncomfortable typography, I think fans will appreciate the update and, most importantly, stock up on new merchandise. It would have been a great opportunity to introduce other, less obvious symbols of Sydney, perhaps something to reflect its maritime history, but I guess when you’re designing a logo in consultation with passionate fans, it’s better to be safe than sorry.