The best channels in life are free

Introduced in 2008, Freeview is the brand name for digital terrestrial television in Australia which brings Australia’s free-to-air channels under a single marketing banner. Freeview encourages Australians to watch free-to-air content (over subscription television) and aims to deliver free-to-air broadcasting to all Australians where, when and on whatever device they choose.

Freeview Australia has launched a significant upgrade to Freeview Plus, offering a more simplified user experience and sophisticated look and feel. The refreshed look was developed by March One and includes a new logo and tagline, “Even better than free”.

The old logo had a rounded rectangle holding shape which, to me, evoked the curves of a CRT television screen – kind of odd for a brand that represents digital television broadcasting. (I know it’s not a rounded rectangle in the strictest sense – a superellipse perhaps – if you know what that shape is called, leave a comment!) The colour of the shape was not random, though, as it linked to the “Green” button you press on a remote control to access the service. Come to think of it, maybe the shape just represented the button.

The type was set in Gill Sans Heavy with some modifications; the tittle of the i was replaced by what looked like four-way navigation buttons on a remote, and the word “plus” was slanted to match the angle of the w and to accommodate a plus sign. The extreme slant was a bit uncomfortable, but the position of the plus sign could have been worse. Overall I think there was a bit too much going on there. The logo should have stuck with a single visual hook, but instead it tried to shoehorn a few too many symbols.

The new logo retains Gill Sans (now with tighter kerning) and reinstates the original tittle of the i. The “+plus” is replaced by a stylised plus sign with 45-degree angles that are carried through in other visuals. It’s a simple mark that combines the “plus” concept and association with the four-way buttons in a single visual device. While the holding shape is gone, the primary version of the logo is still white, so it relies on a dark background (in this case, purple) to stand out, which may not be ideal in all applications. Just let it break free, guys.

As mentioned, the user interface of the service has also been updated. It has new features to help you discover content and keep track of your favourite shows. I won’t ramble on about all the details, but I will share my brief thoughts on two of the most accessed screens. 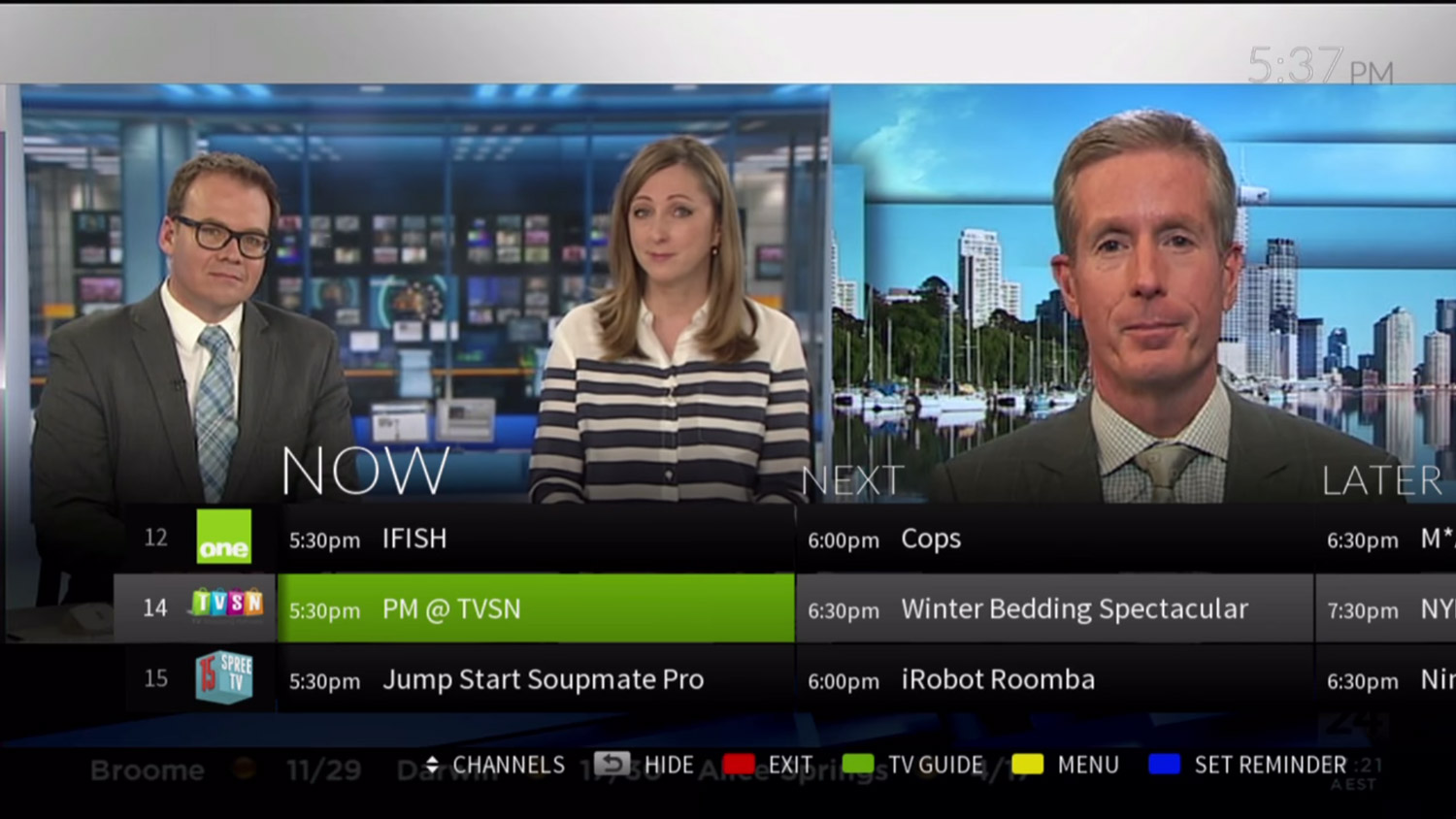 When you first press the “Green” button on your remote, it opens up the Mini Guide, above, which tells you what you’re watching and what’s coming up. Previously (above left), you could see information for three channels at once, with the ability to scroll through other channels and set reminders for upcoming shows. Now (above right), you’re presented with information only on the current channel, plus an image-based carousel of shows available on catch-up.

As someone who never feels the need to catch up on local programming, this is a significant downgrade to my experience with Freeview Plus. When I access the service, I’m really only interested in the guide, which saves me time spent flicking through every channel to see what’s on. To see the channel list now, I would have to advance to the full guide, which means the current broadcast is reduced to a corner of the screen. 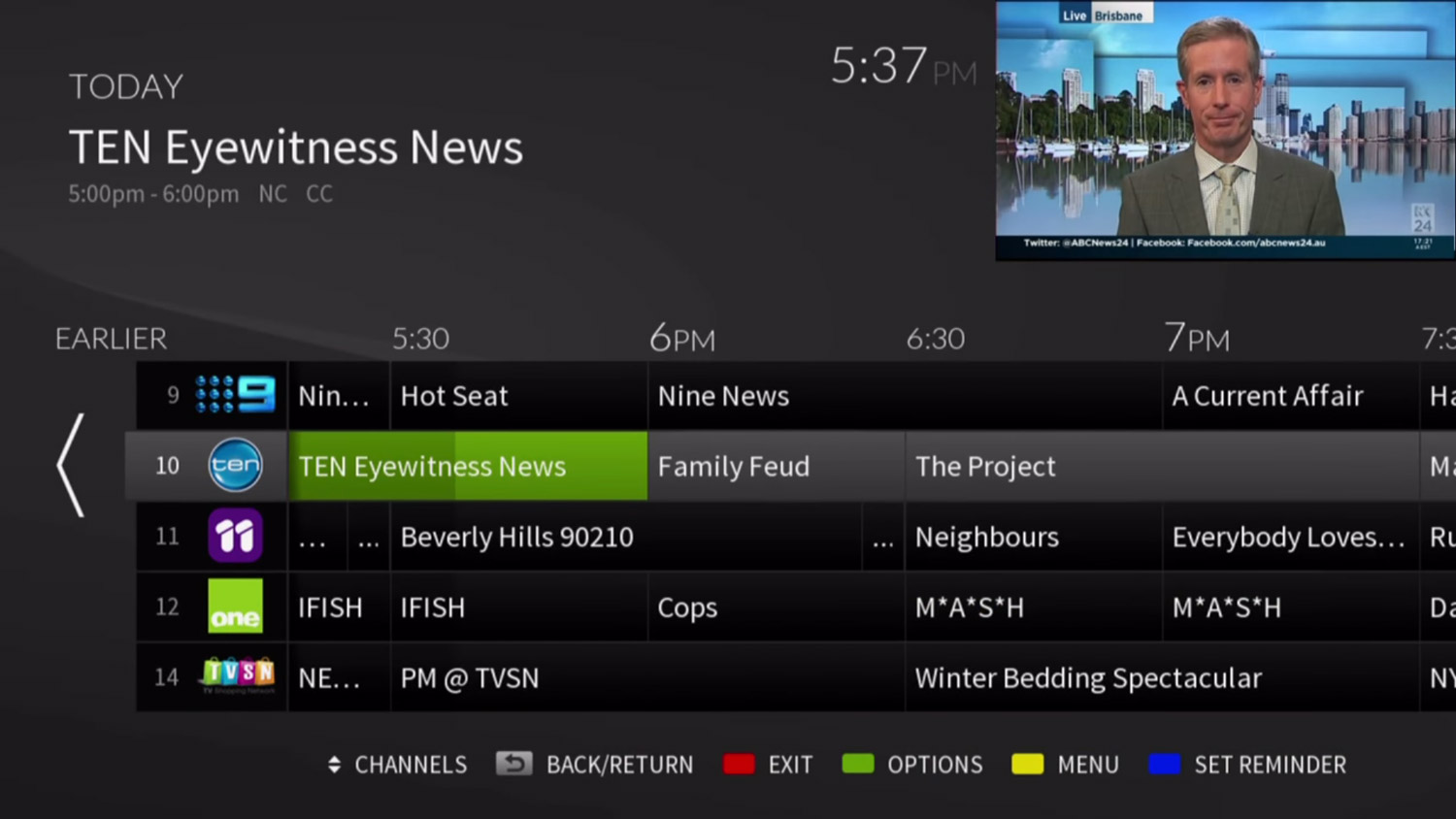 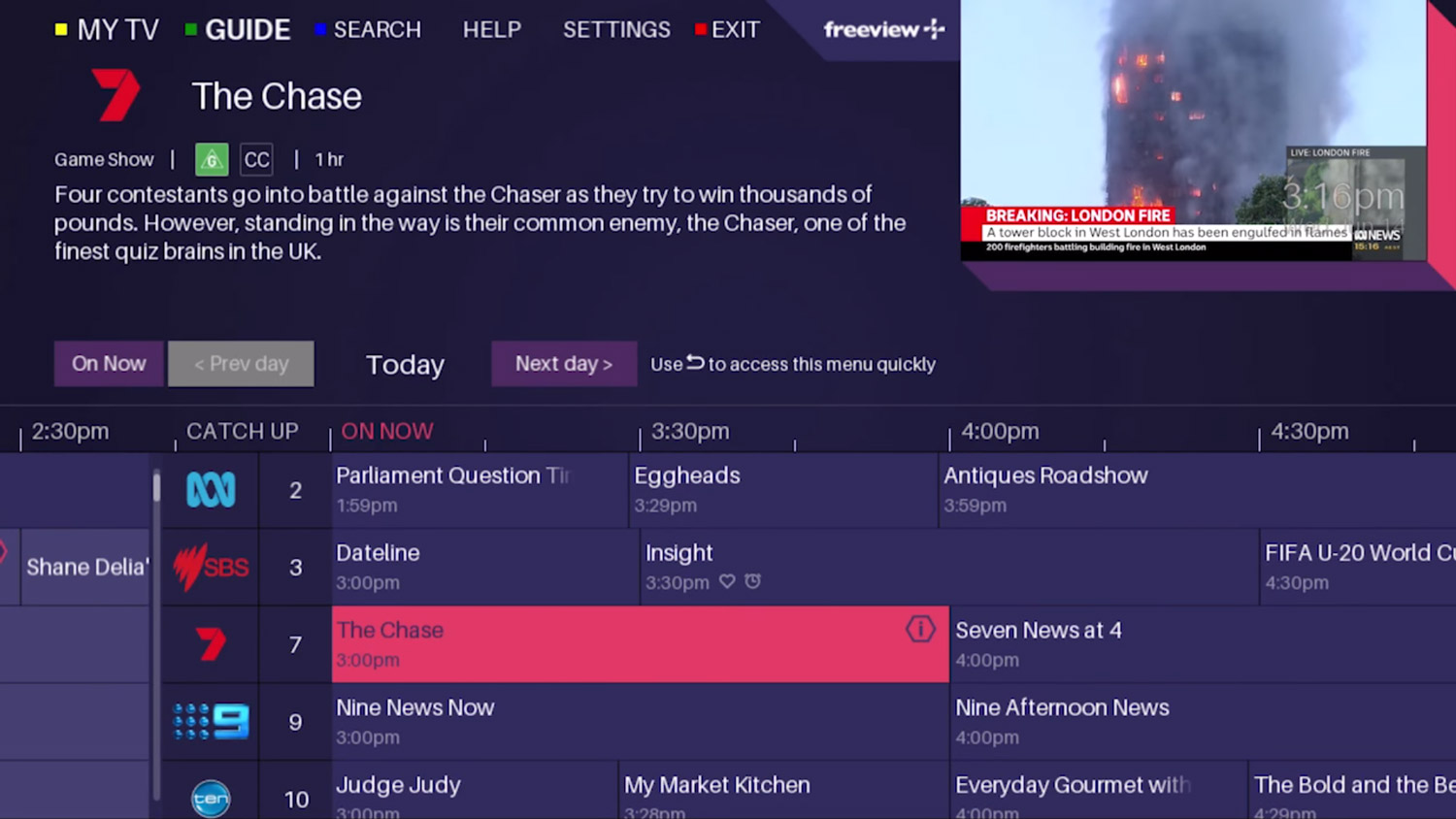 The full guide itself, above, gets a lick of paint and pulls in more information about programs than before. New tidbits such as program descriptions, genres and content classifications are certainly useful in helping you decide what to tune into. Once you do get to this screen, you can actually scroll back in time in the EPG to access shows you’ve missed, rather than opening up the individual catch-up apps for each network – that’s neat.

From an accessibility perspective, though, the new interface seems a bit of a step backwards. The font sizes in the EPG are smaller (not great when you’re sitting some two or three metres from the screen), and there is less contrast between text and background for buttons in focus (purple on pink).

Overall, the refresh is passable. The logo distills the elements of the old version to something less fussy, and while I wouldn’t consider Gill Sans a very adaptable typeface, here its funky humanist style (exaggerated by its weight) is a refreshing departure from the go-to geometric sans-serifs of many new logos today. The interface, while introducing new features which may be a boon to voracious consumers of TV, comes across as garish in its presentation and weakens its accessibility in the process. For a very light user like me, I just want to get the information I need in as few steps as possible; it doesn’t have to look pretty. But hey, it’s free.

Check out the video below which walks you through all the features of the new interface.