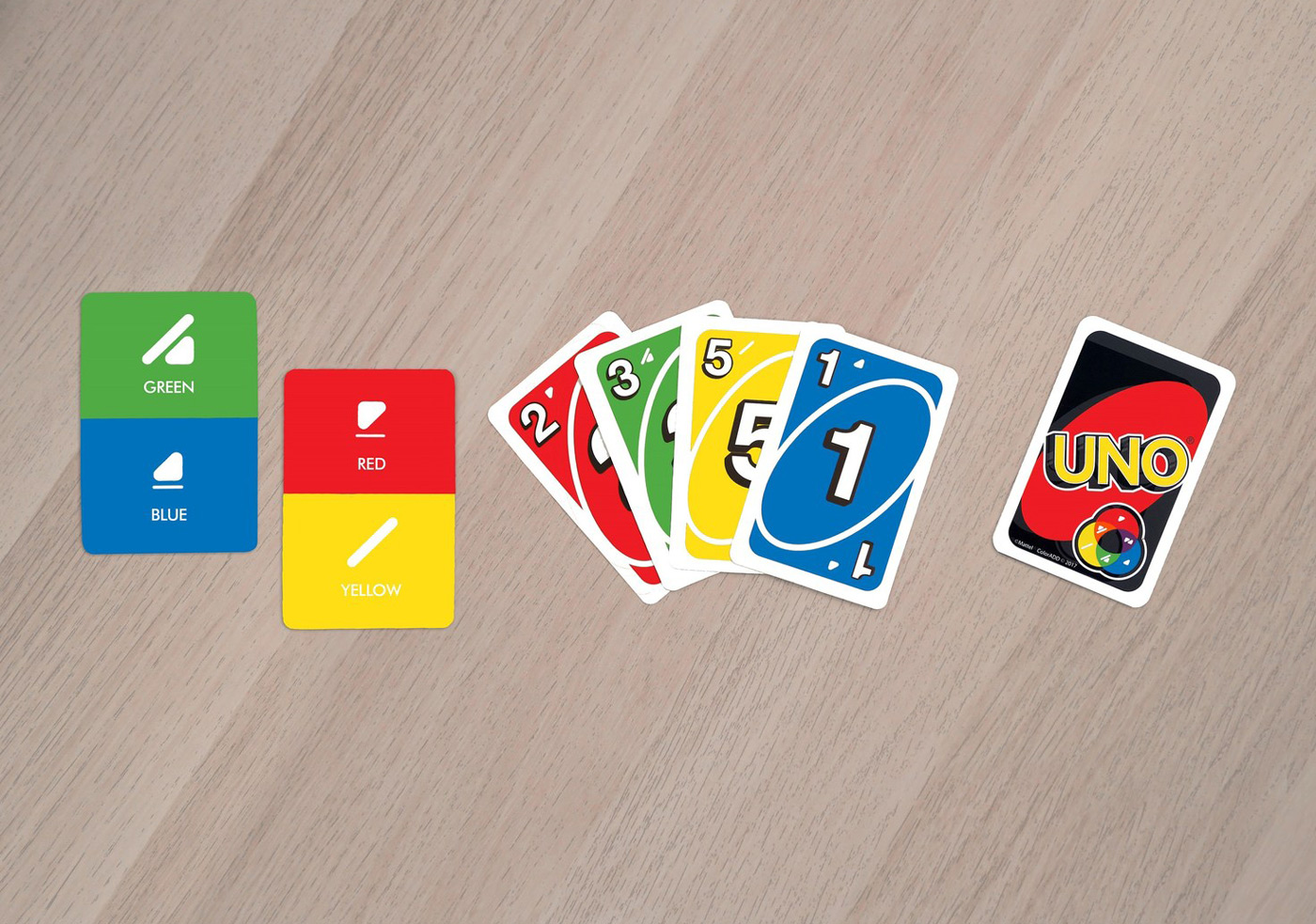 I see your true colours

Uno, the classic card game which involves matching colours and numbers, is frustrating enough when you’re playing against some very competitive friends. (Personally, I have excused myself from Uno sessions of late to avoid upending tables.) But it’s a little bit more frustrating for the 350 million or so people worldwide who experience some form of colour blindness, as they have difficulty distinguishing particular colours – most commonly red and green, which Uno features prominently.

After 46 years in print, Mattel is releasing a new deck that features an accessibility system provided by ColorADD, an organisation founded in Portugal to aid those who are colour blind. So how does it work?

ColorADD is essentially a system of icons for representing colours, based on three symbols representing the three primary colours. Not only does it label colours, it visually explains the colours that create other colours. For example, the triangle of red and the slash of yellow make the the icon for orange.

The icons are placed on the top-left and bottom-right corners of each card to identify the suits, as well as on each colour on Wild cards. The deck also includes two cards (above) with a legend for the ColorADD system. The game remains otherwise unchanged.

I appreciate Mattel’s efforts to make the game more accessible than it already is, but does the new system really offer the best user experience?

The icons are rather small on the cards. If the cards are far away enough, it could be difficult to discern the orientation of the icons, which is critical to identifying colours. As you can see above, the icons are right side up at the top and upside down at the bottom, like the numbers, which is a snag in a system where icons have rotational symmetry.

For someone who hasn’t encountered the ColorADD system before, they would have to consult the legend and try to remember which icon goes with which colour – an unnecessary hurdle. Given that UNO only uses four colours, I don’t see why Mattel couldn’t use more distinct labels for each of them – like, I dunno, the colours spelled out in words. Teaming up with ColorADD and plugging their colour identification system is certainly more marketable, but I feel that Mattel missed the mark by adopting a likely unfamiliar, potentially confusing visual code, then printing it small.

At the moment, the specialised deck is only available on the Mattel Shop to those in the U.S. and Canada. It is, as Ray Adler, Senior Director, Global Games at Mattel, says, “a separate version”, much like other themed decks that have been produced. But if the goal is truly inclusive design, then why not make it the main version of the game? Casual players might not even notice the difference. “We’ll see the response,” says Adler. “And it could be something we do in our everyday pack.”