7plus is a video-on-demand and catch-up TV service wholly owned and run by the Seven Network in Australia. It is a replacement for PLUS7, a catch-up TV service jointly owned by Seven Network and Yahoo! 7plus will offer on-demand episodes of television series (including full seasons of Seven’s classic dramas and family favourites) and live streaming of channels Seven, 7TWO, 7mate, 7flix and Racing.com. It will also offer an extended content library including global dramas and exclusive commissions. It can be accessed through a browser, smartphone apps and connected TVs, with more devices to be supported in 2018.

The previous PLUS7 logo was okay. I’m not particularly fond of holding shapes like the rectangles that surrounded the text and icon. The inner elements should be able to stand freely on their own, in my opinion. Just look at the screenshot of the old website below, where the PLUS7 logo sits on a dark grey background – why does the logo need its own background?! Other than that, the type was fine – can’t go wrong (usually) with good ol’ Gotham.

“Plus” is now set in lowercase in a lighter, rounded sans-serif, lending it a friendlier feel. The play icon within the p – an obligatory reminder of the nature of the service – is where it ought to be and isn’t too obtrusive. There is something odd about that p though, in the way the stroke curves back into the vertical; it sort of loses its smoothness. I’m not sure if that’s the shape of the original font or a wonky edit by the designer. Other than that, the descender of the p and ascender of the l align flush with the top and bottom of the Seven logo, and the striking red brings it all together nicely. 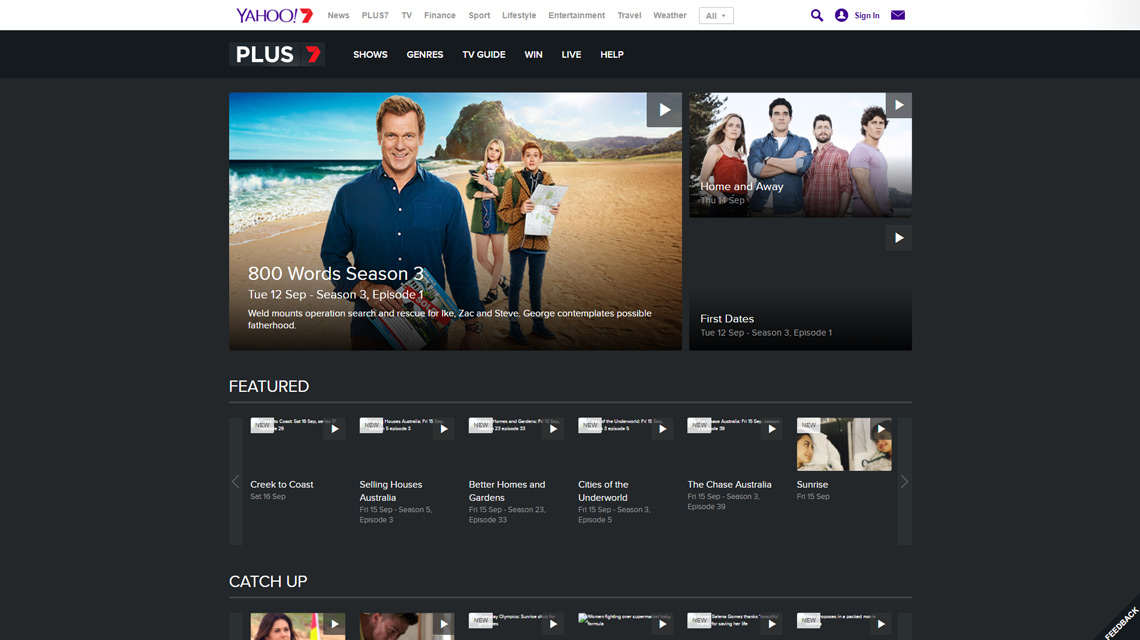 The website also receives a design overhaul. It’s brighter, with larger images and a responsive layout that makes much better use of the available screen space. Live channels are now displayed on the front page with thumbnail previews as well as new progress bars. There is also a new keyword search function which was sorely missing from the previous website.

Overall, this is a good update for the service. The new logo and website feel fresh, and in particular the website should be noted for its functional improvements and responsiveness. The only issue that remains is deciding what to watch.

(Below is a teaser for the new service.)